They’ve become impossible to ignore. Bright yellow bikes have invaded Brussels. They are called Villo!, which is a smart contraction of the words ville (city) and vélo (bike). Public bikes have existed for years here but until a few months ago, there were still very few stations available. But as the map below shows, this has changed drastically! The Villo! website tells me there are now Villo! stations every 450 meters in the central communes of Brussels. That’s right, not every 449 or 451 meters, but every 450 meters. You got to love the precision of this figure. 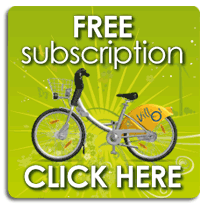 This year the subscription is for free so why do without? Click on the image on the right to order your Villo! pass online. Hold two weeks patiently and the Villo! pass will be delivered directly in your mailbox. Then go to a station, put your pass on the terminal. That will unlock a bike. Take the bike. Cycle gently until you find the closest station to your destination. Return the bike. Now if you’ve managed to do all that in 30 minutes, your ride was for free! If it takes you longer, the extra half an hour is 50 cents. Almost nothing.

I think Villo! is great. I have my own bike, which I use every day to go to work. But from time to time, when I go out right after work, I let my bike at my office’s car park because I don’t want to burden myself with it. Then later on to go back home or the day after to go to work, I take a Villo! The Villo! bikes are even of better quality than my own, although it is brand new. For instance, there are 7 speeds on a Villo!, only 5 on my personal bike.

There’s just one hiccup. It seems the production of Villo! bikes has not followed the same rate as that of Villo! stations. Here’s an example, Friday morning, 09:05 at Mérode:

There is a way to avoid to go to a station full of enthusiasm only to find it empty: you can check the Villo! website to see whether bikes are available at the stations around you. However, as far as I know, there is no BlackBerry application. There is a Wap application for mobile phones. I’ve tried it on my BlackBerry but I can’t get it to work. It seems there is an iPhone application. I don’t know whether that one is working.

So there are still improvements to make but it’s really worth ordering your Villo! pass and using it from time to time. Cycling gives you a whole other experience of the city. But be careful, the streets of Brussels are still rather dangerous for cyclists.

1 thought on “I tried Villo! and I liked it”