This weekend I had the pleasure to be invited by the great folks of the office of the European Parliament in Spain to a roundtable on how to communicate Europe online along with about 50 bloggers, journalists, EU officials, and MEPs. I was asked to make a presentation on the topic of “How to communicate Europe through social media” on behalf of the Blogging Portal. My grandparents fled Spain in 1939 because of the civil war. So for the French woman of Spanish origin that I am, being invited in Cordoba to talk about Europe, which is above all a project of peace, was very symbolic and also quite emotional.

Although I am following closely what’s happening in the French and English-speaking Euroblogospheres, I am not too aware of what’s going on in the Spanish one. This meeting was a true crash course. It’s always good to get out of the EU bubble. In Brussels we live and breathe Europe. Having regular meetings with national actors is not only beneficial but also essential. In the end, the Cordoba meeting was exactly the breath of fresh air I needed after 3 hard-working months. And I’m back to Brussels overwhelmed with ideas. Talking about them all would probably take about 10 posts. But here are my general impressions of the meeting.

You wouldn’t believe this. The meeting started with an “ola” performed by the 50 participants around the table. The “ola” is the human wave you see supporters do at football games. This reflected the general atmosphere of the gathering: friendly, laid-back, and above all, cooperative. I’ve previously written that I would like to see more public figures talk about Europe with passion. Not surprisingly I found passion in Spain this weekend. Cultural difference? Probably.

The main point I wanted to make during my presentation was that in today’s networked world, European institutions should stop trying to “communicate Europe”, as if Europe was a message to broadcast to the masses, and start interacting i.e. talking about Europe between Europeans. As Pau Solanilla from Europeando.eu pointed out: “Either we understand that hierarchy is not the organising principle anymore or we haven’t understood anything”. In social media, communication is personal. You will not be successful communicating online if you speak as an institution. Therefore, European institutions should give away a bit of control and allow its representatives to speak, not as institutions, but as people working in institutions. Bárbara Quílez, who is in charge of the European Parliament’s web page in Spanish, made a very subtle remark on this point: “We [European civil servants] can humanise Europe, not personalise it”. Indeed, it’s about giving Europe a face, not about being the face of Europe. 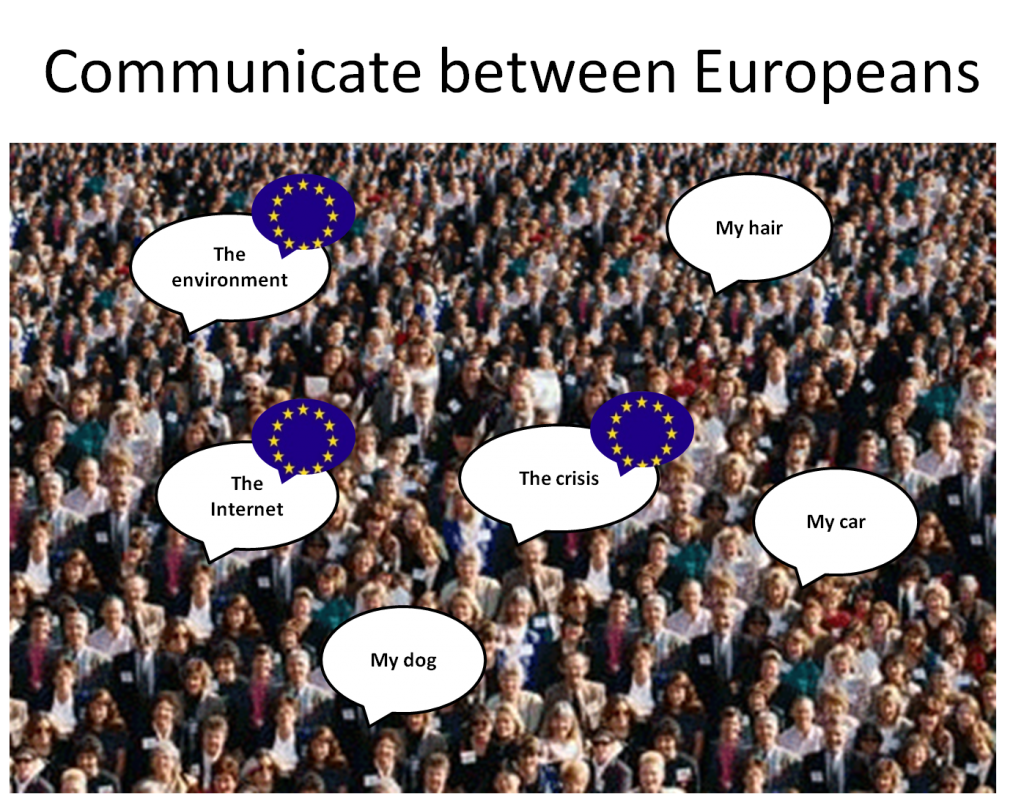 In the end it’s all about relationships

According to Pau Solannilla, networked communication is about content, channels, and relationships. The success of the meeting in Cordoba demonstrated something online activists know very well. Building relationships online leads to strong relationships offline. Although I have been interacting for months with all the Spanish Eurobloggers who attended the meeting, I had never met them in real life. My experience has showed me that online activities are always strengthened after bloggers meet in person. That’s why meetings such as the Cordoba one are essential.

Never doubt that a small group of thoughtful, committed citizens can change the world. Indeed, it is the only thing that ever has.[1]

On Saturday #PEredes, the hashtag used at our meeting in Cordoba managed to get into the Twitter trending topics in Spain, and talking about Europe at that! For Europe to be in the public debate, it just takes a full room of EU geeks and good wifi.

At our meeting, Susana Del Río, a sociologist specialising in European communication said: “Debate between Europeans creates political creativity”. I couldn’t agree more, Europe is the future of politics. Nowadays throughout the Western world, democracy is in disarray: low election turnouts, falling numbers of party memberships, lack of trust in politicians… we are all politically disenchanted. In such a situation, speaking about politics between Europeans can lead to new solutions and regained interest in politics. The European Union is a UPO, an unidentified political object. It is up to us, European citizens, to shape it the way we would like it to be. As Francisco Luis Benítez put it: “Europe is worth it”.

Eventually I would say that the initiative of Ignacio Samper’s team of the European Parliament’s office in Spain has led the way. We need similar meetings held in other European countries. I would like to see this happening in France, for example, where the blogosphere is one of the most dynamic in Europe. On top of it, I would like to see a general Euroblogger meeting organised in Brussels. European Parliament, do you read me?

13 thoughts on “My impression of the Euroblogger meetup in Cordoba: Yes Spain is different”